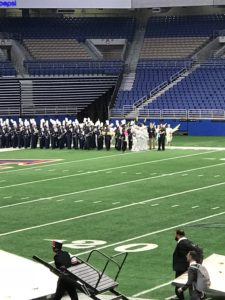 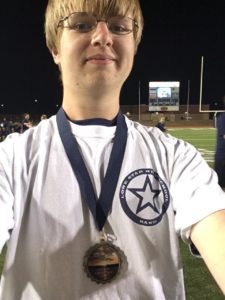 Well, the band did it! They placed 4th in prelims and 3rd in finals and they are going to the State Marching Band Contest to compete on Nov. 8th!!!! Only the 3rd High School Band in Frisco to ever make it this far, this is the first year Lone Star High School will send a band to the state competition. The kids, the parents, the directors are all beside themselves.  I’ve never seen Peter so happy (or so tired!!!) as he was last night.  (The picture to the right – the selfie – is last week at Regionals.) I uploaded the video again only to discover there’s a setting in the lower right hand corner when you play the video that allows you to change the quality.  So if it’s grainy, check that and make sure it’s at the highest quality.  (I tried to point out Peter’s position in the picture to the left – he is at the very corner of the square they form at the very beginning of the show.)

A few fun facts as you watch their performance:

We performed this afternoon and just learned we made it into the final 10.  We march tonight to see who goes to State!

Also, a funny story about Samuel…

The book fair was this week.  Samuel bought a pen that wrote in invisible ink and became visible under the pen’s UV light.  Then he went to ILA and did an assignment.

He claimed he thought the teacher wasn’t going to grade it.  When he turned it in to her, she looked at the paper then back up at him.

“There’s nothing here,” she said.

“I know.  I wrote it in invisible ink,” he replied.

She just stared up at him.

“I’ll trace over it with a real pen” he said, walking back to his desk.

Lone Star placed 4th in the prelims;  5th in the finals.  Great showing by the Lone Star band!