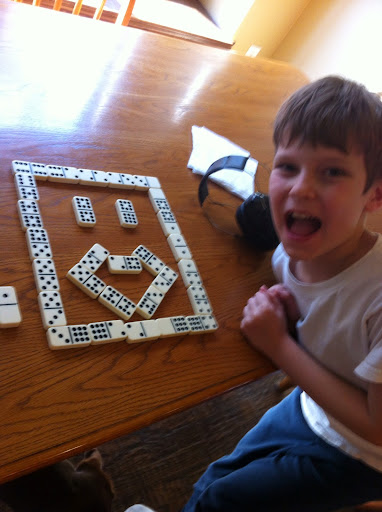 Notice how he has organized the dominoes so that the numbers are matched end to end.

There should be a law to prevent angry blogging, kind of like texting and driving. Of course, I’m so mad right now, I wouldn’t pay any attention to it.

For those of you who don’t know, Matthew, our 8 year old, has Aspergers Syndrome. Long story short, this is a very high-functioning form of Autism that appears most often in boys, and in our case, results in a child with an extremely high intellectual IQ and an extremely low social IQ. At the time of his testing last year, he was socially on the same level as a 2 year old.

One of the “symptoms”, if you will, of Aspergers is what’s called perseveration. Basically, it’s the inability to let go of something that’s in your mind. The way they explained it to me was that it’s like there’s a track that they go around and around on until the trench is so deep, they can’t get out by themselves.

So here’s what we went through last night and this morning.

I have a rule that everyone makes their lunches for school the night before. In order to eat supper, they must have a list of things completed, and this is one of them. And lest you feel sorry for them, they have HOURS to get about 3 things done, yet they manage to put it off until supper is on the table.

Yesterday, Matthew started making his lunch and discovered that Peter had taken “his” sandwich – actually half a sandwich – and put it in his lunch.

And so began the epic Tale of Two Sandwiches.

I’ll spare you the incredibly boring details, but in the end, because the sandwich in question had mayo instead of Ranch Dressing, it was ruled to be Peter’s (Matthew only eats Ranch on his).

At first, I stood firm on the “make your lunch rule” but finally, I just got sick of arguing with Matthew (if that wasn’t his sandwich, he wanted to figure out who took his and make sure they got consequences!) and told him to eat his supper and if he didn’t have a lunch in the morning, he would just have to buy. With his own money, since he only gets to buy once and he always saves it for pizza Friday.

This morning, after I had totally forgotten about the whole epic sandwich debate of 2012, I learned what happens when a child with Aspergers goes to sleep perseverating. He wakes up even more entrenched in his beliefs.

I did everything short of solve his problem, which is what he was holding out for.

In the end, he was screaming, holding his ears, yelling that his head hurt and it was all my fault. On and on, until I was in the car, about to leave him at home. He threw the sandwich I made him and a cheese stick into his lunch box and caught us right before we pulled out of the garage.

Then he proceeded to get in the car and yell at us to be quiet and leave him alone.  Needless to say, he has lost all screen time for the foreseeable future.

We were late to school today, which means even though they were probably only 5 minutes after the bell, they will all 3 be counted absent for the purposes of the State. I’ve already gotten one truancy warning letter – this will probably mean a second warning.

And all because of a stupid sandwich.

When I got home, I called our FISD parent trainer who is assigned to our family and told her what happened. She has been coaching me through a lot of issues like this since the diagnosis last year. Her advice? Do whatever you have to do in the morning – in this case, it would have been to say “You didn’t get your lunch made so now you will have to buy today” – but follow it up with “we will discuss this further after school”. Then after school, tell him he owes me for the lunch. Write down what happened and what the consequences are, then just hand it to him after school. She also said to make sure next time I have a plan in place before the kids wake up. In other words, don’t just hope the issue goes away.

I saw one of Matthew’s Special Ed teachers outside the school this morning. I think he might have been trying to coax another child out of a car. I told him the situation (I usually text one of them so they have a head’s up of what they will be facing that day) and he just smiled and said “Sounds like we’re going to need a lot of Jolly Ranchers today”.

Jolly Ranchers are fine for Matthew. I’m personally hitting the hard stuff myself. Of course, you know I mean Starbucks, right?

Thank you for giving me 5 minutes of your life that you can never get back.