End Of Summer. Sort Of.

My kids have become spoiled.

I wish I could claim ignorance and say I have NO IDEA how this happened.  But kind of like that question you get when you say you are pregnant and it’s a total surprise (NO, I AM NOT PREGNANT.  THIS IS AN EXAMPLE.) I have to say that yes, I do know what causes that.

And it’s not just the blanket response “Their sin nature”.  It’s more like “Their sin nature colliding with the removal of their boundaries, due in part to the vacations/trips/camp/mother’s hurt back/mother’s unwillingness to return to reality – over the last 3+ weeks.”

That’s a mouthful.  Maybe that’s why most people prefer the first response.  But I wouldn’t be honest if I didn’t acknowledge my part in the equation.

So.  Here we are.  My kids are spoiled and their little spoiled attitudes are causing me all kinds of angst.  There really is only one solution but I’m resisting with every fiber of my being.  The solution is obviously to tighten the ship and put them to work and move those boundaries back where they need to be.  But you know what that requires?  Self-discipline.  Energy.  A willingness to put the vacation attitude away for another year.  A willingness to face – wait for it – THE SCHOOL YEAR OF 2011-2012!  (Imagine that with a loud echo, as if spoken into a microphone in a crowded stadium.  That was what it sounded like in my head when I wrote it.)

It’s not so much that I am dreading this next school year (even though I am); it’s more that I just don’t want summer to end.

(Well, let me rephrase that.  I don’t want summer vacation to end.  These summer temperatures could end today and I wouldn’t be sad at all.  I had to add that in case God is hinging the weather for rest of the summer on me.)

With the end of summer comes the beginning of schedules and activities and worry and stress and lunch boxes and busy mornings…and I am just really enjoying not having to wake the kids up at the crack of dawn and rush around and try to get to school on time and so on and so forth.

But while I have enjoyed the relaxed pace of life, I have been sickened by how quickly that selfishness and arrogance has crept back into their hearts.

Here’s just one example.  Yesterday, Matthew and Peter were playing Pokemon together.  Pokemon is kind of like a traditional card game, except that you collect your own deck of cards and then battle with someone else who has a deck.  These decks are really huge – 100s of cards – and part of the fun of a battle is not knowing which card you will turn over next.  But Matthew stacked his deck.  He even admitted that he cheated by going through and putting his cards in a particular order.

As you might imagine, this did not sit well with Peter.  So Peter took his deck and shuffled it.

I have to admit that I had a hard time not high-fiving Peter over that solution.  Because Matthew deserved it.  But being the parent means I had to admonish Peter, saying “Next time, find a solution that does not involve taking the deck from Matthew.  Like, walk away and find something else to do.”

So Matthew cheated, then when Peter shuffled his deck, he got really really angry and (to his credit) used his words instead of his fists.  Except that his words were “YOU’RE STUPID!  AND DUMB!  AND LAME!”  And when that wasn’t enough of a release, he turned on Samuel (who was an innocent bystander, if there is such a thing in a house full of boys) and said the same thing.

Now, in pre-vacation days, this would have been a warning, followed by a swat if it happened again.  Because we do not allow our children to speak to each other that way.  And that is the protocol I followed.  However, I added a step when I didn’t think Matthew was truly repentant for his actions.  Instead of just saying the standard “Peter, I’m sorry.  Doyoupleaseforgiveme?” I told Matthew he needed to confess to Peter what he did wrong.  As in, something like “Peter, I was wrong to call you those names.  I can see I really hurt your feelings.  Please forgive me.”  Then do the same for Samuel.

To me, when you wrong someone, and especially if your mother offers you grace instead of a swat, you sort of owe them something.  If they need an opportunity to tell you how what you did hurt them before they forgive you, you provide it.  If they require you to fix something of theirs that you broke, you fix it.  So it seemed a small thing to me for Matthew to honestly confess his wrong to Peter and Samuel.

Small thing for me; big thing for Matthew.  Because (in his words) “That will embarrass me.”  (Heaven forbid he shows a little humility!)

I won’t bore you with the details but let me conclude by saying that he did finally say it (albeit under his breath and really fast).  But the mere fact that he had such a hard time opened my eyes to current state of affairs here on the home front.  So today, I am back at the helm, ready to get back on track.  I have a list of jobs that will need to be completed prior to the boys having any screen time, and then they will have to earn themselves some dimes if they want to play.  On top of that, it’s laundry day.  That in and of itself will provide many “teachable moments” since the boys generally would prefer to do ANYTHING rather than fold clothes.

Which is why we will have to remove the clothes from our suitcases before we wash them.  Because unpacking our suitcases and putting them away in the attic for another year has been too much for me to face.  Until now.  It is finally time to say good-bye to summer vacation and say hello to THE SCHOOL YEAR OF 2011-2012.

I’ll let you know how it goes.  And if you see a crazy lady driving too fast in a grey minivan, headed for the airport with 3 boys, a dog and suitcases tow, call my husband.  He’ll know how to talk me down off the ledge with words like “date night” and “almost the weekend” and “I’ll take over while you go take a shower”.  He’s really good at that.  Guess he’s had some practice!!!

(Here are some pictures of our trip to Pearsall.) 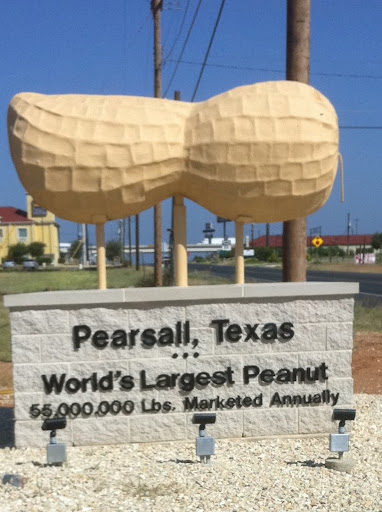 Trip to Pearsall yielded this treasure. Pearsall's only statue has been restored and placed at the entrance to the new HEB. 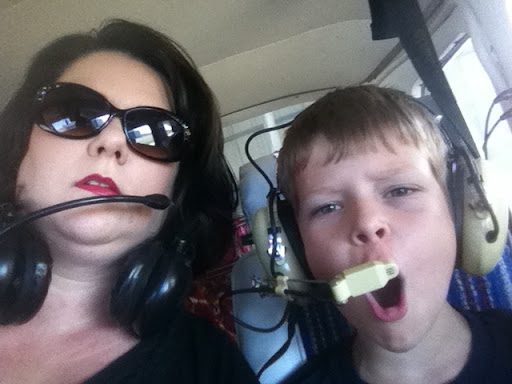 Poppy took us for a ride in his 4 seater airplane while we were visiting. I rode in the back with Matthew. 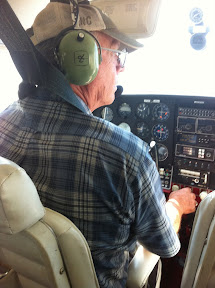 Love seeing my dad in the pilot's seat. Takes me back to when I was a kid. 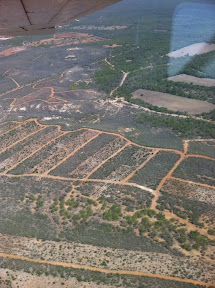 Picture from the sky. Obviously. 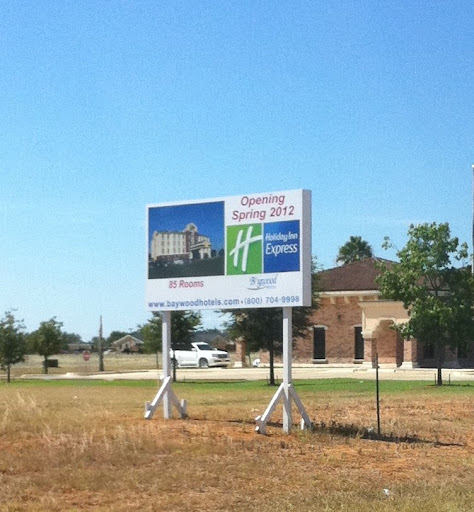 As hard as it is to believe, that sign is posted on IH-35 just North of Exit 99. That's right, Pearsall is getting not one, but THREE new motels! 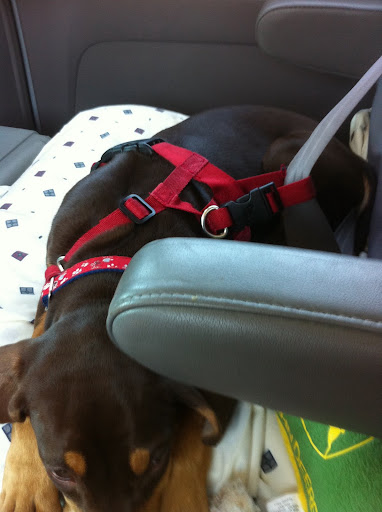 Here is the doggy harness that allowed Snickers to ride in the car without her kennel. 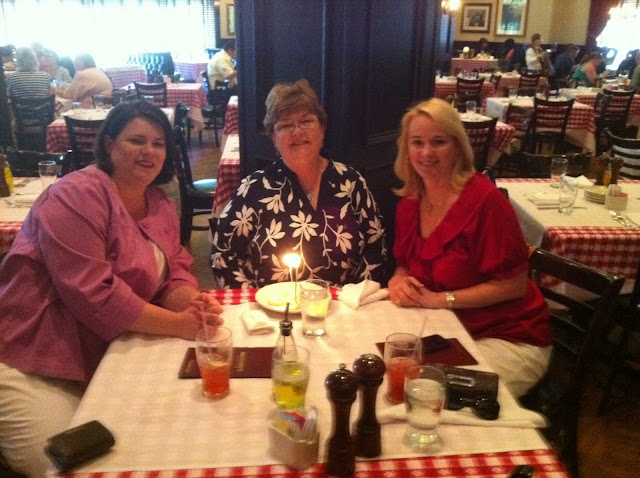 We took mom to lunch at Maggiano's for her birthday. I told her she doesn't look a day over 79! (Just kidding, Mom!) 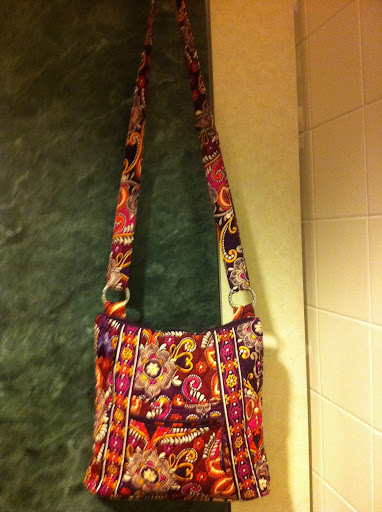 For Mom's birthday, we shopped, ate and saw a movie. We stopped by Vera Bradley because mom had a coupon for $20 off. That, combined with the money from my in-laws for my birthday = a new purse!!!