Beginning Saturday at 5:40am (Hawaii time), we started our long journey back to Texas.

At 5:40am, I woke up in my bed on the cruise ship and couldn’t go back to sleep…

My bed on the cruise ship (fold out couch)

…so I watched Oahu grow bigger and bigger on the horizon from our balcony, until we docked around 7:30am. We finished packing, went to breakfast one last time at the Lazy J…

Mom in the Lazy J

…then headed down to the port where the rest of our luggage awaited.

Our flight from Oahu to the Mainland wasn’t until 9:35pm, so we took the airport shuttle, checked in our luggage at the Delta Kiosk, then rented a car for the rest of the day. Despite a little rain, it turned out to be a GREAT last day in Hawaii. We had massages, saw a movie, ate a wonderful lunch, and shopped at the Honolulu Vera Bradley store! 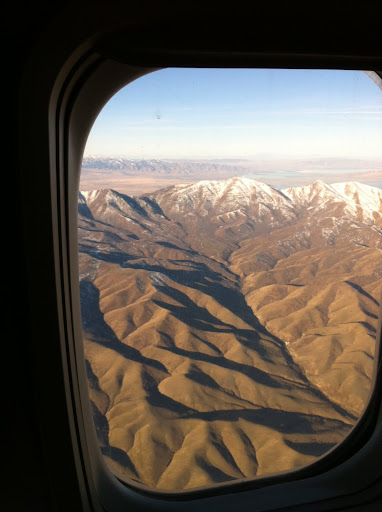 View of Salt Lake City from window of airplane

…then another 2 hours until we landed in San Antonio.

That’s when it got really hard. After 10 days together, our foursome had to part ways.

Mom, Bethany & Meredith went to get their cars out of security parking and find somewhere to eat lunch before Bethany headed to Austin and Mom and Meredith headed to Pearsall. Meanwhile, I switched airlines from Delta to Southwest, which meant claiming then rechecking my bags, going back through security, then boarding yet another airplane for the last leg home.  Thankfully, because we made the Salt Lake City connection, I was able to get on a much earlier flight to Dallas. I was landing at Love Field by around 4:30pm Sunday.

The highlight of my day was when I exited past security and four familiar faces were waiting to surprise me.

I don’t think I’ve ever been so happy in all my life. In a heartbeat, I had thrown my bag on the ground and had three little boys hugging and kissing me, with all our tears mixing in the blur of cheeks and lips and foreheads and little arms wrapped around my neck.

Then I spotted my sexy husband, standing back, waiting for the boys to finish their reunion with me. He looked amazing in his navy sweatshirt and jeans – I don’t think I’ve ever loved him more – or been more grateful to have him all to myself.

We went to eat Bar-B-Que – pure nirvana after eating Hawaiian food for almost 2 weeks – then headed home. It was very odd to see all the Christmas lights and experience the cold weather dressed in my t-shirt, jeans and sandals, but I guess it’s time to face the truth – Christmas is just around the corner.

And so, after what felt like a week of not sleeping, last night I fell into bed and thanked God for seeing me safely home.

At 7am this morning, I woke up with only one question going through my  mind: WHY IS IT SO DANG BRIGHT OUTSIDE THIS EARLY IN THE MORNING???

But despite my exhaustion and confusion over all the time change, I managed to get the boys – clothes on – to the door of the school just a second or two shy of being tardy.  Which I consider to be a major victory, given the jet lag and all.

Then I came home and drank two cups of Kona coffee and when I couldn’t stay upright another minute, crawled back under the covers and slept until the dog forced me to get out of bed at 11:30am.

That was 2 hours ago and I’m still up, so I guess that means I’m on my way to conquering the jet lag.

[Update: I wrote this post Monday, and almost got it up before my computer crashed.  After fighting with my computer for a while, I gave up and decided to try again Tuesday…when I discovered our internet access was down.  Now it’s Wednesday and I’ve just gotten up from another 2 hour nap and I think if the stars are aligned correctly, this might even go live today.]